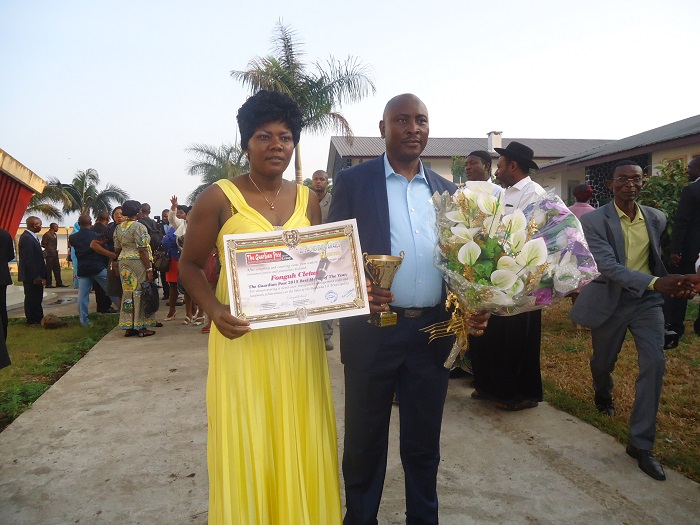 The Bamenda III municipality is celebrating the recognition of their Mayor, Fongu Cletus Tanwe, as Guardian Post 2015 Best Mayor of the Year.

It should be recalled that Mayor Fongu was declared winner of the 2015 Best Mayor of the Year at the 13th edition of The Guardian Post Achievement Awards ceremony that was staged at the Buea Mountain Hotel on March 4, 2016. Present at the March 4 awards presentation ceremony were top government functionaries, diplomats, political, religious, traditional and civil society leaders. It should be noted that winners of The Guardian Post Achievement Awards are voted by Cameroonians while compilation, votes-counting and results proclamation is done by a jury, made up of prominent journalists from renowned media houses in Cameroon.

With barely less than one full five-year term in office, Mayor Fongu is already being very much talked-about as if he has been mayor for the past twenty years. Even his detractors believe he would leave his foot prints on the sands of achievements at the Bamenda III Council. Besides ingenuity, a character trait which very few people possess, Mayor Fongu is one of those rare Mayors with a sense of innovation. He is bent on turning Bamenda III municipality to the cleanest and most developed municipality and is determined to leave the Bamenda III Council a better place than he met it. Being the visionary, reform-minded and modern day mayor that he is, Mayor Fongu  has made it top priority to collaborate and give a listening ear to all the Councillors and the council Staff irrespective of position in society or posts they hold in the Council. The big advantage in his collaborative spirit is that the Bamenda III municipality staff and Councillors work as a team, targeting common objectives for the benefit of the people. Apart from this impressive achievement, Mayor Fongu has also demystified the title “Lord Mayor”. Unlike what obtains in other council areas, he receives people of all walks of life right in the inner sanctum of his office. This laudable down-to-earth approach has given him the possibility of sounding public opinion on major policy issues of public interest as well as getting proposals on how to move the Bamenda III municipality forward. He is working hard not only to better the working conditions of the council staff but is also striving to raise the quality of life of the people of his municipality.

Even though an SDF Mayor, Mayor Fongu’s development efforts in Bamenda III do not have any political calculations nor are intended to push him further up the political ladder. He is sacrificing his life for the well being of the people of Bamenda III and humankind.